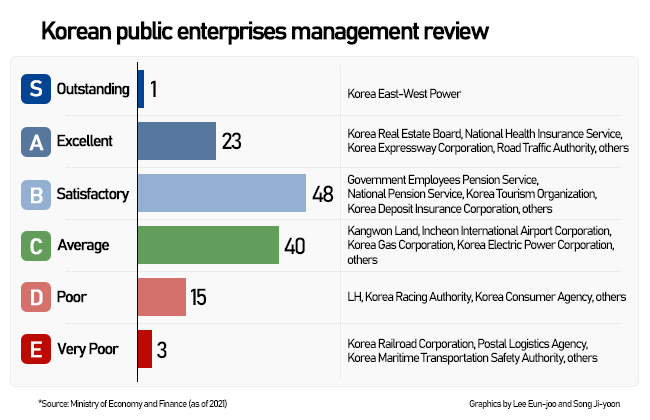 More than a dozen South Korean state-owned enterprises, including Korea Land & Housing Corporation and Korea National Railway, have failed government performance reviews for mismanagement over the past year, resulting in penalties such as dismissal and a pay cut.

The Public Establishments Management Committee on Monday announced the results of its 2021 management review of the country’s state-owned enterprises.

The evaluation was carried out by a team of 109 private experts including professors, accountants and partners trained by the Ministry of Finance and the Economy in February on the performance of 130 establishments, including 36 public companies and 57 parapublic establishments on a scale of 100 points.

In the annual ranking, 18 companies including LH, KORAIL and Korea Racing Authority failed.

As a result, the CEO of the Korea Maritime Transportation Safety Authority would be removed from his post and the heads of three institutions would receive a warning. Executives of 11 companies that posted net losses will have to voluntarily return their annual bonuses.

Korea South-East Power, Korea Expressway Corporation and 21 other institutions received an outstanding A rating and 48, including Yeosu Gwangyang Port Authority and Korea Hydro & Nuclear Power’s B rating. Forty others were rated C, including Kangwon Land and Incheon International Airport Corporation.

The public committee also advised the chiefs, auditors and executive directors of KEPCO and its 9 subsidiaries and 11 state-owned companies that recorded net losses last year to return bonuses voluntarily.