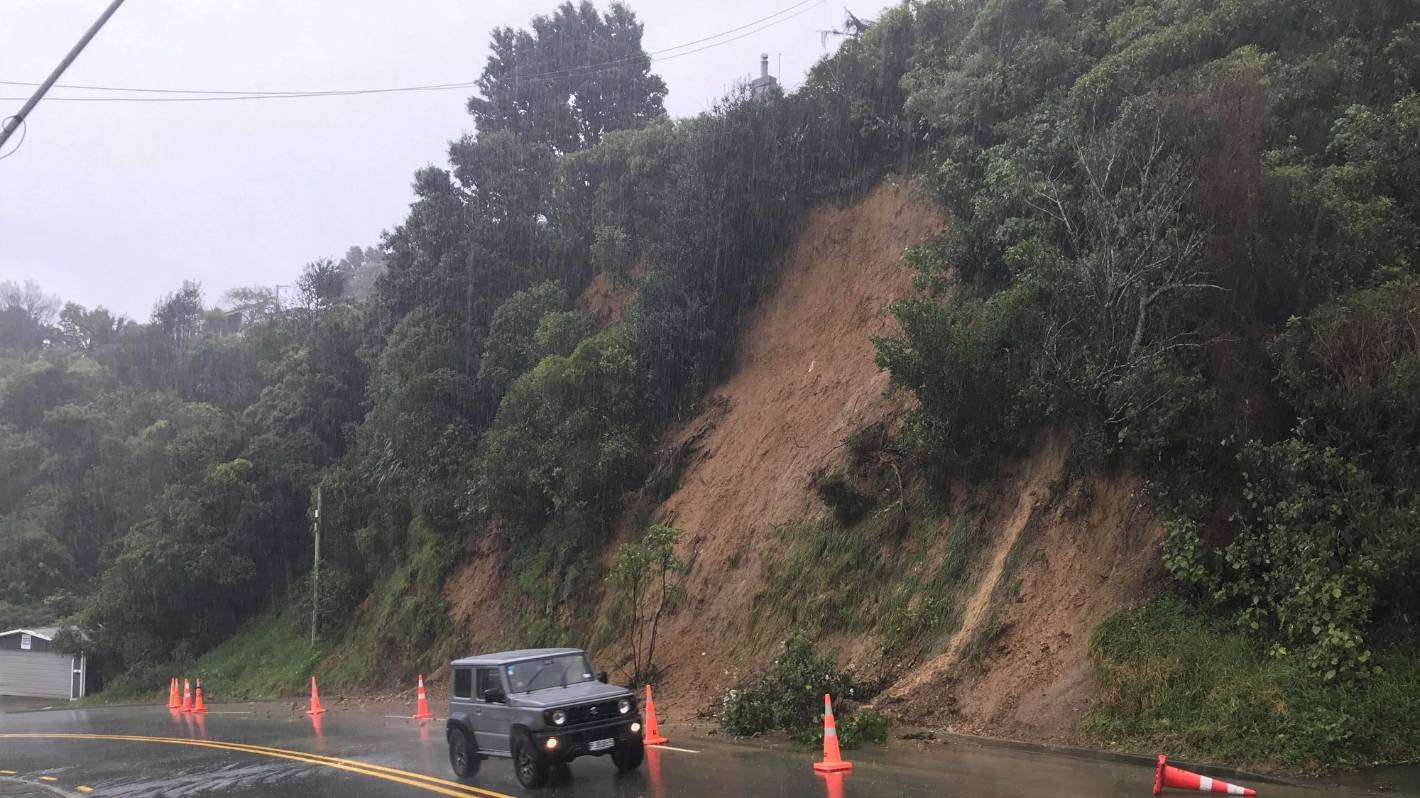 The Western Hills of Lower Hutt are littered with little slides like this one on London✓ Road, Kokoroko. Mayor Campbell Barry said contractors were struggling to manage the number of slips that occurred over the weekend.

Lower Hutt Mayor Campbell Barry is calling on the government to step in to relieve the pressure on the small number of contractors struggling with a growing number of slips in the area.

After a weekend of torrential rain, the western hills are covered in small landslides and there were major landslides in Stokes Valley, Wainuiomata Hill Road and in the eastern bays.

The council isn’t sure exactly how many landslides there are, but contractors – including technical assessors – are under pressure, and many are diverted to deal with the impacts of Nelson’s extreme weather event.

The Stokes Valley and Wainuiomata landslides have reignited the debate over access to the city’s two largest suburbs. In the short to medium term, the focus must be on cleaning up, but Barry said the issue of second access to the two suburbs will need to be revisited.

Barry will speak with Emergency Management Minister Kieran McAnulty on Monday to outline the situation in Lower Hutt and to see what outside help is available.

“The workers on the ground are doing an outstanding job, but there are clearly capacity issues given the scale of what has happened in the region.”

Barry reminds the residents that they may need to be patient, as Nelson must be the number one priority.

Assessing slip security is a priority, but there are only a limited number of people with the necessary expertise.

Barry said it was the wettest winter he can remember, but the large number of slips raised issues of resilience and long-term planning.

The unprecedented level of landslides in the region means that road projects should be reassessed. And with climate change becoming a growing problem, resilience must be a higher priority.

Recent weather events have highlighted the vulnerability of Lowry Bay, and Barry said the design of the planned shared cycle/walkway may need to be reassessed to ensure it can cope with rising sea levels and increasingly violent storms.

Residents of Stokes Valley have expressed concern about the vulnerability of their only access road after recent landslides. The slides moved again over the weekend and Barry said the question of a second route would be re-explored.

The same is true at Wainuiomata, where a large slide had reduced the capacity of the hill road.

In the past, the council had considered a tunnel or road leading to Naenae, so the residents had a second way out of town if the road up the hill was blocked.

Barry said residents of Stokes Valley and Wainuiomata needed to understand that any solution would be costly and would require central government funding. However, all options, including a tunnel to Wainuiomata, should be considered.