Australia’s journey through Omicron is like the Hell Bus Tour. Skewed steering, seat belts forgotten or not working, and driver chatter wanes with stressed passengers.

Eventually we’ll see the back of the swampy ground on this outback trail. But in worse condition and at a higher cost than the Morrison government suggested just a few weeks ago.

“Omicron is a change of gears and we have to move forward,” Prime Minister Scott Morrison said Monday. “You have two choices here: you can pass or you can lock. We are for passing.”

LIVE UPDATES: Read our blog for the latest news on the COVID-19 pandemic

Looking at the current mess, you should conclude that the gearbox is shot.

Morrison’s “either-or” dichotomy is simplistic and misleading, trying to mask the failure of having been better prepared with a more nuanced answer.

It wasn’t “either-or”. It was a question of managing as well as possible a transition which must take place towards the new world said to be “living with COVID”. The challenge was finding the right settings out of a range of choices.

So what went wrong? Almost everything, it seems. The federal and state governments share responsibility, but as prime minister, Morrison must take primary responsibility.

A catch-22 has emerged

After being able to boast (with a few notable exceptions) coping well with COVID in the early stages of the pandemic, Australia suddenly went from minimal to widespread infection in the community (excluding Western Australia).

Obviously, this Omicron journey was going to be difficult. But it surely shouldn’t have been as bad as what we are experiencing on many fronts.

When can you get a post-COVID booster? As cases of Omicron skyrocket, many people are faced with the need to reschedule their vaccination appointments. Here are some principles to help you decide when to lock it.

Previous lessons were not properly learned. The planning has been dismal. The relationship between health and the economy has been misinterpreted.

Morrison’s much-vaunted “national plan” of last year (admittedly formulated when we were in the Delta stage) put near total faith in vaccination. Vaccination has been transformative, reducing disease severity and saving lives. But that doesn’t stop the transmission of the highly infectious Omicron, which can still hamper the country.

With Christmas approaching, and thanks to a good economic rebound from the lockdowns, the federal government wanted people to spend as much of their accumulated savings as possible as an additional stimulus.

In the largest state, the new Premier of New South Wales, Dominic Perrottet, was particularly enthusiastic about achieving maximum freedom as quickly as possible.

But soon catch-22 emerged. If Omicron tears up, people might not be locked in, but many will choose or be forced to behave as if they do – doing less, tightening their purse strings.

The miscalculation of the test

The lack of preparation was even more astonishing than the miscalculation.

The future need for rapid antigen tests (RATs) was anticipated months ago. Yet we faced a severe shortage, just as delays in getting PCR test results lengthened. The shortage of rapid antigen tests on retail store shelves shows little sign of abating in January, with a major increase in deliveries within weeks.

After the vaccination stuff, you would have thought that the federal and state governments would go all out to get enough RATs. But no.

Without denying the importance of collecting RAT results, there was some irony in New South Wales this week in rushing to announce fines for people who don’t record them – when they can’t easily secure testing. Now the NSW Government admits its policy will not be enforceable – the policy was “a call to the line”, a NSW minister has said.

It’s great that young children are currently immunized. But who thought it wouldn’t put immense pressure on already overworked GPs, with many parents preferring to take their children to a doctor rather than elsewhere?

This work will not be finished by the end of the holidays. But Morrison desperately wants the kids to go to school. The Treasury told the National Cabinet on Thursday that “the current arrangements could see 10% of the Australian workforce, including many workers in critical supply sectors, removed from the workforce”. If schools did not open, it could add another 5%. Queensland and South Australia have already postponed their back-to-school dates.

Morrison argued at the end of last year that with a very high vaccination rate, we should not focus on the number of cases but on the rates of hospitalizations, much lower than those of previous waves.

But with infections soaring, the absolute numbers of hospitalizations will weigh down the system, while crowding out other care, including elective surgery.

The narrative that most people wouldn’t be very sick, so the healthcare system and the economy should be fine, has always been problematic.

He hasn’t given enough consideration to how everything connects to everything else in this pandemic and how the interconnections are multiplied by a hundred times when the numbers get so high. In just one example, the lack of RAT weakens supply chains.

The real heart of the economy 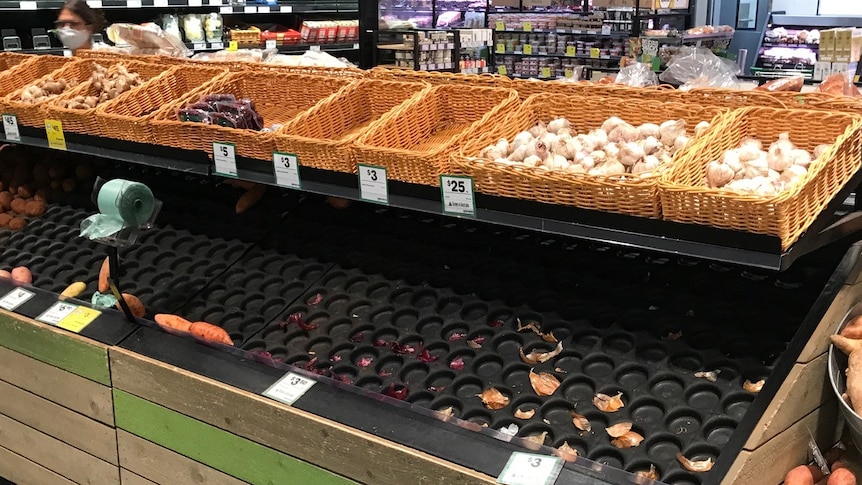 Australians are being given a stark reminder of how value is actually created in an economy and how supply chains really work, writes Jim Stanford.

COVID is hitting these chains in ways that were inconceivable in 2020. Morrison this week personally led discussions on the supply side of the crisis.

At the start of the pandemic, Australian governments were proud to follow health advice. From now on, health considerations take over from economic and political considerations.

Isolation rules and definitions of close contact are continually being changed to keep the wheels turning – whether it’s the wheels of the healthcare system (trying to keep enough workers on the job) or those of transport moving goods to supermarkets.

But the more you dilute these rules – even for very good reasons – the more infections can be expected to increase, leading to new problems and stresses.

Morrison acknowledged on Thursday, after the latest changes: “The fewer restrictions you put on people to get them to work, the more strain that can potentially put on your hospital system. And vice versa.

“The more you try to protect your hospital system, the more people you put out of work, which disrupts supply chains. So it’s a very delicate balance that needs to be constantly recalibrated.”

The Omicron wave should reach its “peak” within a few weeks. But how much planning is going on for the variants that might follow?

As Australians struggle to get their hands on mainly imported rapid COVID-19 antigen tests, several Australian companies have been waiting for months for local approval to sell their RATs.

Assuming that there is no new variant soon, the government is counting on an appeasement before the elections.

Work is underway on the late-March budget with its election sweeteners, though Treasurer Josh Frydenberg has likely been slowed down a bit this week by enduring a COVID crisis himself.

Morrison hopes that in an election in May he can evade or minimize blame for the gross mismanagement of the Omicron wave.

But “long COVID” is a nasty disease for those who catch it, and it could have a severe political variant.

Michelle Grattan is a professor at the University of Canberra and chief political correspondent at The conversation, where this article was first published.