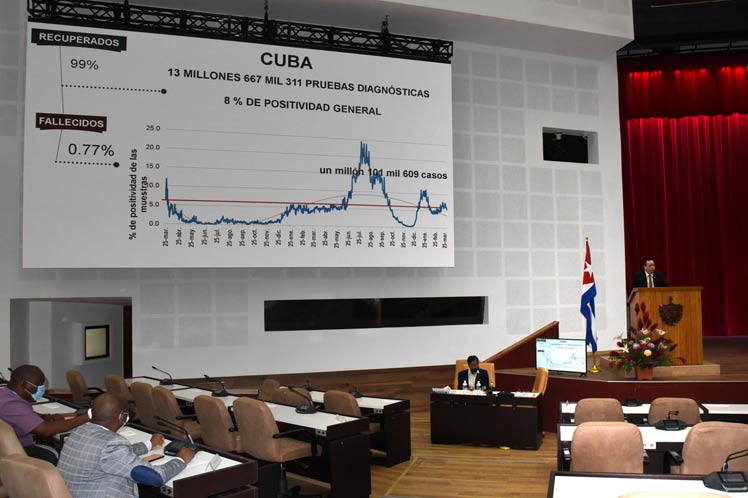 In his speech on the second day of the BioHabana 2022 International Congress, the official revealed that from four laboratories, Cuba could build 27 of these centers with a processing capacity of more than 25,000 samples to carry out diagnostic tests for SARS -CoV-2.

He said that through the organization of health services, intensive monitoring rooms have been created and beds have been doubled for the management of suspected cases and patients with mild or moderate illnesses.

Portal demonstrated the benefits of a scientific management system which, among other results, determined circulating variants of the virus through genomic surveillance and established the immune response in convalescents and in the rest of the population after the outbreak. administration of vaccines.

The integrated work of all sectors, the active participation of the people and young people in particular, and the role played by science, not coming from the market but from the socialist system which puts the human being first, have been forces for country, he noted.

The Minister discussed the benefits of drugs such as Nasalferon and Biomudulin-T with preventive effect, and other innovative drugs such as Jusvinza, Nomotuzumab and Itolizumab, which have shown recovery rates above 75% in serious patients , did he declare.

Finally, he praised the high vaccination rates achieved in Cuba, where more than 35,672,000 doses of the local products Abdala, Soberana 02 and Soberana Plus), and assured that it is the first country in the world to massively protect its citizens over two years. way.

Since the outbreak of the pandemic, he added, 27 products have been developed to combat the virus, 18 of which have been authorized for emergency use by the Cuban regulatory authority.

The BioHabana 2022 Congress, which runs Monday through Friday, 29, brings together delegates and guests from 51 countries at the Havana Convention Center.